The Combined Effects of CO2, Temperature and Weeds on Wheat Grain Yield

<![CDATA[<b>Paper Reviewed Kannojiya, S., Singh, S.D., Prasad, S., Kumar, S., Malav, L.C. and Kumar, V. 2019. Effect of elevated temperature and carbon dioxide on wheat (Triticum aestivum) productivity with and without weed interaction. Indian Journal of Agricultural Sciences 89: 751-756. In the words of Kannojiya et al. (2019), “many reports are indicating that rising carbon dioxide concentration and projected changes in climate could favor the growth and development of weeds over crops,” which they say could “have negative consequences for agricultural productivity.” To investigate this thesis, the six Indian researchers devised an experiment to examine the interactive effects of CO2 and temperature in the presence or absence of weeds. The study was performed at the ICAR-Indian Agricultural Research Institute in New Delhi, India. Wheat plants (Triticum aestivum, cv. HD 2967) were sown in the field in temperature gradient tunnels that maintained the air temperature at either ambient temperature (Ta), ambient temperature plus 1.5°C, or ambient temperature plus 3.0°C. Additionally, atmospheric CO2 concentrations were sustained at either 400 ppm (ambient) or 550 ppm (elevated) in a full factorial design throughout the duration of the growing season. And to study crop-weed competitiveness effects on wheat growth and yield, Kannojiya et al. sowed two weeds (Phalaris minor and Chenopodium murale) at the beginning of the growing season in half of each temperature and CO2 treatment combination. The impact of these three factors (CO2, temperature and weed presence or absence) on wheat grain yield is illustrated in the figure below. As shown in Figure 1, rising temperatures and the presence of weeds both had a negative impact on wheat grain yield. In contrast, elevated CO2 had a positive effect. In fact, in most cases it fully ameliorated the two stresses and enabled grain yields that were similar to or greater than that observed under ambient CO2, ambient temperature and no weeds present. Thus, in the future, wheat grain yields will likely be enhanced above that presently observed in places experiencing higher temperatures and the presence of weeds. And that is good news on the future of food security, especially for a country with a growing population such as India. 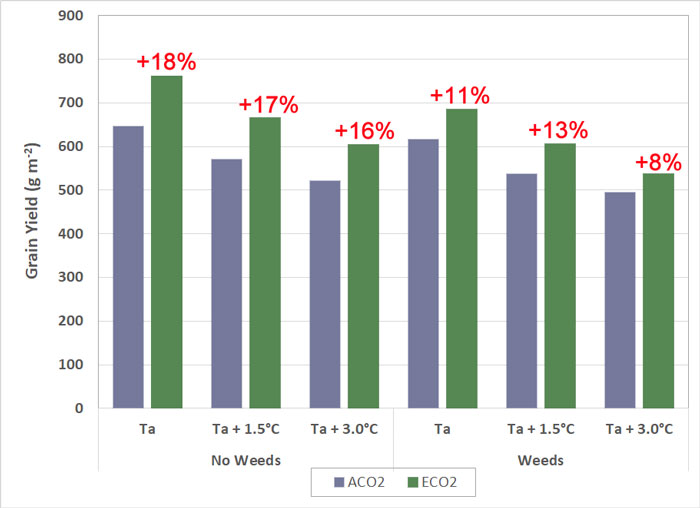 Figure 1. Grain yield of wheat plants grown under different combinations of atmospheric CO2, temperature and weeds or no weeds. ACO2 = ambient CO2 (400 ppm), ECO2 = elevated CO2 (550ppm), Ta = ambient temperature. The percentages shown in red text indicate the improvement of grain yield due to elevated CO2 at a given temperature and weed regime. This image was derived from Table 2 of Kannojiya et al. (2019).
This article appeared on the CO2 Science website at http://www.co2science.org/articles/V23/mar/a6.php]]>