As you all know, the game plan of climate activists is to restrict and ultimately ban the use of carbon-based fossil fuels — coal, oil, and natural gas. Don’t worry, those will all be replaced in due course with perfectly clean and free “renewables.” You won’t even notice that it is happening! At least until your price of electricity triples or you can’t heat your house any more.

I’ve long said that the politics of energy will change significantly when people start to get hit with reality in the form of soaring prices or shortages. An early example of the latter is starting to take shape here in New York.

In recent years, jurisdictions have competed with one another with promises to get higher and higher percentages of energy from “renewables,” and lower and lower percentages from fossil fuels, by earlier and earlier dates. For example, California claims to be “leading the nation toward a 100 percent clean energy future and addressing climate change.” California’s SB 350, enacted into law in 2015, directs the state to reduce “greenhouse gas” emissions to 40 percent below 1990 levels by 2030 and to 80 percent below 1990 levels by 2050. But New York was not about to cede “climate leadership” to those rubes on the West coast. As reported here on July 6, New York’s legislature had just passed the “Climate Leadership and Community Protection Act.” Its goals: to get 70% of electricity from “renewables” by 2030, followed by reduction of all carbon emissions — not just from the electricity sector — by 85% below 1990 levels by 2050. Take that, California!

And then there’s the question of where to start, because after all, you have to start somewhere. And you can’t really expect to be taken seriously in your claim to be replacing fossil fuels if you just keep adding and adding to your fossil fuel infrastructure and capacity. Back in 2014 Governor Cuomo got the ball rolling by banning “fracking” for natural gas in the state. But of course, they “frack” in a big way right next door in Pennsylvania, and it’s just a hop, skip and a jump by pipeline to bring that gas over here.

So, since 2014, the big goal of the fossil fuel opponents has been to block any new pipelines to bring in the gas from Pennsylvania. Earlier this year their focus was a pipeline proposed by the Williams Companies to cross New York Harbor and bring natural gas from Pennsylvania to growing communities in Brooklyn, Queens, and Long Island. For example, check out this website of something called the “Sane Energy Project,” which sought to “Ban Fracking” and “Stop [the] Williams Pipeline.” Here’s a picture of one of their many demonstrations: 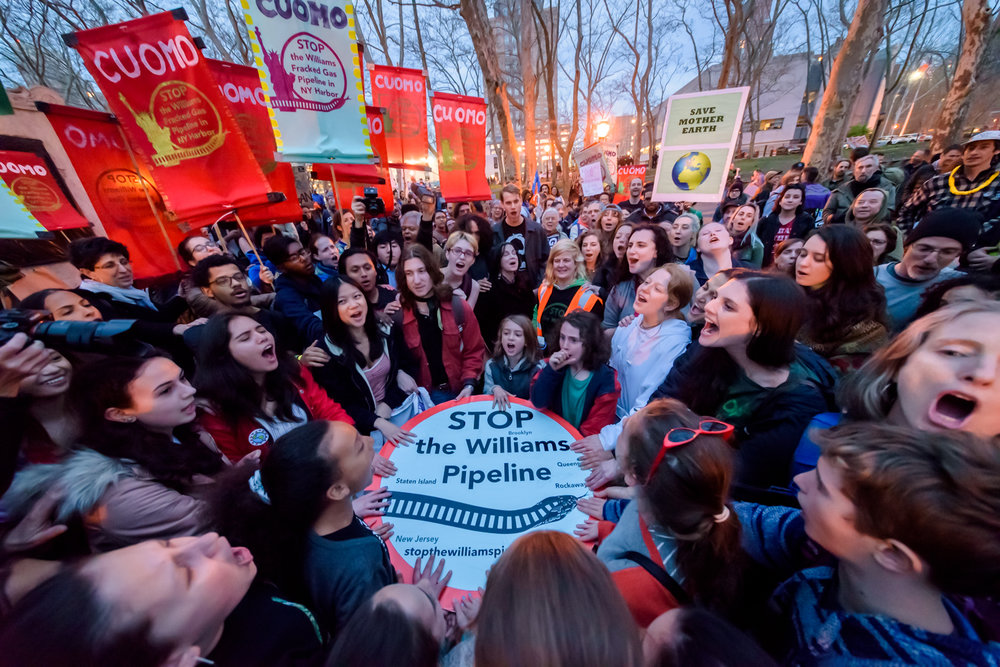 As of April, the pipeline had cleared all of its needed federal approvals, and was ready to start construction. It was just waiting for “water quality” permits from the states of New York and New Jersey. The utility in Long Island, named National Grid, was warning that without the new pipeline it would shortly run out of capacity and would be unable to take on new customers. Needless to say, the environmental protesters pooh-poohed that talk.

In May, the New York Department of Environmental Conservation rejected the water quality permit for the pipeline. From the New York Times on May 15:

In a major victory for environmental activists, New York regulators on Wednesday rejected the construction of a heavily disputed, nearly $1 billion natural gas pipeline, even as business leaders and energy companies warned that the decision could devastate the state’s economy and bring a gas moratorium to New York City and Long Island. The pipeline[‘s] . . . operator, the Oklahoma-based Williams Companies, pitched it as a crucial addition to the region’s energy infrastructure, one that would deliver enough fuel to satisfy New York’s booming energy needs and stave off a looming shortage. But environmental groups said Williams was manufacturing a crisis to justify a project that would rip apart fragile ecosystems, handcuff New York to fossil fuels and hobble the state’s march toward renewable resources.

A few weeks later, the state of New Jersey followed suit and denied its own water quality permit.

So how are things going out there in Brooklyn, Queens and the rest of Long Island? The issue of natural gas has suddenly sprung back into the news over the last week, but for a new reason — people are starting to scream that they can’t get natural gas hookups. From the New York Daily News, August 27, “Homes, businesses in limbo as National Grid denies natural gas service”:

Families and businesses are being left in the lurch by National Grid amid its dispute with the state over a proposed natural gas line. Among the casualties of the service moratorium are a Brooklyn family who cannot get natural gas for their newly renovated house and a Crown Heights restaurateur who had to push back the opening of his new eatery.

Among various tales of woe, one of my favorites is this one, reported at NY1, from a woman named Julie Levin from Park Slope, Brooklyn:

“I didn’t know what it was until I researched it, and I actually, loving our environment, am against this pipeline, but I do need gas,” Park Slope resident Julie Levin said at the news conference. “We have nowhere to go. Our lease is up in a month. We have no more money left. We need to move into our house.”

Well boo-hoo! But you can’t really blame Julie. Pretty much everyone in Park Slope thinks that natural gas comes from the tooth fairy.

Needless to say, New York politicians — most particularly the ones that have been the most vociferous opponents of the pipeline and supporters of the New York “climate leadership” law — have rushed forth to blame National Grid for the crisis. Governor Cuomo led the charge. From the Daily News:

Cuomo on Tuesday directed the state Department of Public Services to”examine steps” to reverse the service denials, “impose appropriate penalties and sanctions” and “consider alternatives to National Grid as a franchisee for some or all of the areas it currently serves.”

Or consider Assemblyman William Colton of Brooklyn. From the New York Post, August 26:

On Friday, Assemblyman William Colton (D-B’klyn) blasted National Grid for turning away new Brooklyn natural gas service customers. Colton and allied pols insist (dubiously) that National Grid can find other sources of gas. But why is he suddenly demanding greater use of the fuel? After all, Colton cosponsored the state’s “Green New Deal” . . . .

Over at the Post, of course they are having a field day. The headline of the August 26 editorial was “Natural gas bags: Pols scream at the results of their own war on fossil fuels.” Can the pols really have no idea that when they block natural gas infrastructure, sooner or later someone is going to be denied service?

So far, it’s only 2600 potential customers who have been denied service; and the left leaning sources of local news (Daily News, NY1) somehow are going along with the pols’ story that they have nothing to do with this and it’s just National Grid exercising its muscle. As far as I can tell, the New York Times has not yet weighed in. But remember, this is only the beginning. The whole idea of New York’s “climate leadership” law is to take fossil fuels away from the people. And the bureaucrats are nowhere near having a replacement for natural gas ready to go — nor will they ever be, to be honest, at least until they embrace nuclear energy. Sooner or later, the people will figure this out.

This article appeared on the Manhattan Contrarian website at https://www.manhattancontrarian.com/blog/2019-9-2-the-anti-climate-change-energy-crunch-is-starting-to-hit-new-york
]]>