“Patrick J. Michaels, a climatologist who became a lightning rod in debates around climate change, reviled by activists and revered among skeptics for using his academic pedigree to challenge the broad scientific consensus on the causes and consequences of global warming, died July 15 at his home in Washington. He was 72. His family confirmed his death but did not cite a cause. … Survivors include his wife of six years, the former Rachel Schwartz of Marshall, Va.; two children from his first marriage, Erika Michaels of Waynesboro, Va., and Robert Michaels of Richmond; and two brothers.

Dr. Michaels, who spent decades as a professor of environmental sciences at the University of Virginia and as Virginia’s state climatologist, was one of the most prominent contrarian voices in political and policy discussions surrounding climate change. … [W]ith his combination of academic bona fides, his state title and his flair in the boxing ring of policy debate — he described former vice president Al Gore, a leading climate change activist, as a ‘scientist wannabe’ and denounced the ‘self-selected community of climate boffins’ and ‘keepers of the environmental-gloom paradigm’ — Dr. Michaels proved an often effective champion of his cause.

Patrick Joseph Michaels was born in Berwyn, Ill., on Feb. 15, 1950. His father was a mushroom farmer, and his mother was a homemaker. Dr. Michaels received a bachelor’s degree in biological sciences in 1971 and a master’s degree in biology in 1975, both from the University of Chicago. He received a doctorate in ecological climatology from the University of Wisconsin at Madison in 1979. He was a past president of the American Association of State Climatologists.” 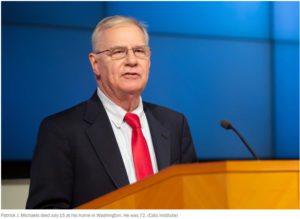