How to Feed the Planet and Its Additional 1.5 Billion Persons 30 Years from Now

Paper Reviewed Mariani, L. 2017. Carbon plants nutrition and global food security. The European Physical Journal Plus 132: 69. One of the greatest issues of our time is that of global food security — more specifically, will the agricultural sector be able to successfully rise to the challenge of producing enough food to feed an increasing world population that is projected to reach 9 billion people just three decades from now? This critical question has been asked by numerous scientists and policy makers; and it has gathered more attention in recent years in light of predictions that rising temperatures may negatively impact future crop yields. The latest researcher to weigh-in on the subject is Mariani (2017), who utilized a physiological-process-based crop simulation model to estimate the change in food production under five different temperature and CO2 scenarios for four crops (wheat, maize, rice and soybean) that account for two-thirds of total global human caloric consumption. The scenarios included Today, Pre-Industrial, Glacial, Future_560 and Future_800, which correspond to respective atmospheric CO2 concentrations of 400, 280, 180, 560 and 800 ppm, and temperatures that were -1 (Pre-Industrial), -6 (Glacial), +2 (Future_560) and +4 °C (Future_800) different from the Today scenario. And what did the author’s model reveal? As illustrated in the figure below, Mariani notes that a “return to a glacial period would reduce by 51% the global productivity for thermal (low temperatures) and nutritional (low levels of CO2) reasons,” whereas a return to pre-industrial conditions would reduce global production of the four keystone crops by 18 percent. Looking to the future, however, Mariani notes that increases in both CO2 and temperature would improve production, increasing the combined production of wheat, maize, rice and soybean by 15 and 24 percent above today’s values. Commenting on his findings and looking to the past, Mariani writes that “the return of temperature and CO2 to glacial or pre-industrial values would give rise to serious disadvantages for food security and should be as far as possible avoided, as also highlighted by the results of Cage and Coleman (2001) and Araus et al. (2003)” (emphasis added). And with an eye to the future, Mariani says that “the agricultural sector is able to successfully meet the challenge of global change and guarantee food security to levels higher than the current ones for a world population that in 2050 will exceed 9 billion people,” to which we would add — only if governments avoid implementing CO2 emission reduction schemes, which schemes are appearing more and more to be akin to genocide. 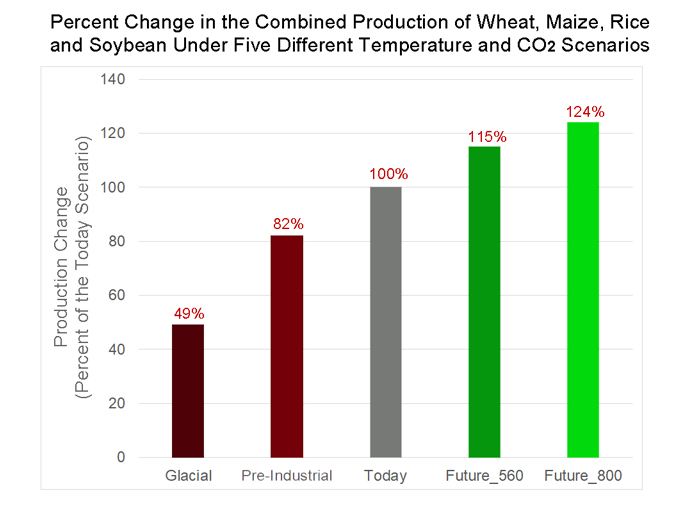 References Araus, J.L., Slafer, G.A., Buxó, R. and Romagosa, R. 2003. Productivity in prehistoric agriculture: physiological models for the quantification of cereal yields as an alternative to traditional approaches. Journal of Archaeological Science 30: 681-693. Sage, R.F. and Coleman, J.R. 2001. Effects of low atmospheric CO2 on plants: more than a thing of the past. Trends in Plant Science 6: 18-24. This article appeared on the CO2 Science website at http://www.co2science.org/articles/V20/nov/a8.php  ]]>