pipeline projects approved, securing better prices for Alberta’s oil by getting it to tidewater and elusive new markets in Asia. Albertans aren’t exactly embracing the grand bargain, and large protests against the carbon tax have been held across the province. New taxes are never an easy sell, but a tax on carbon — in oil country, during a downturn — has proven especially difficult for the government.

Dwayne Bartley certainly isn’t sold on the carbon tax. The retired rancher and Baptist minister lives in Airdrie, Alta., with his wife, who works in nearby Calgary. Between her commute and his diesel truck, they burn a lot of fuel and worry about the impact a carbon tax will have on their bottom line. So much so, that the couple has considered relocating to Mexico to avoid paying the new tax. “It won’t be because we want to, it will be because we have to,” he said. “We will be forced out of the country.” Bartley said he and his wife have already started cutting back on steak and other luxury items to prepare for the dramatic increase they expect the new tax will have on their budget. But the reality of the increases they face is somewhat less dramatic. The new tax will mean the couple will spend about $550 more next year on fuel to run their two vehicles and to heat their home. 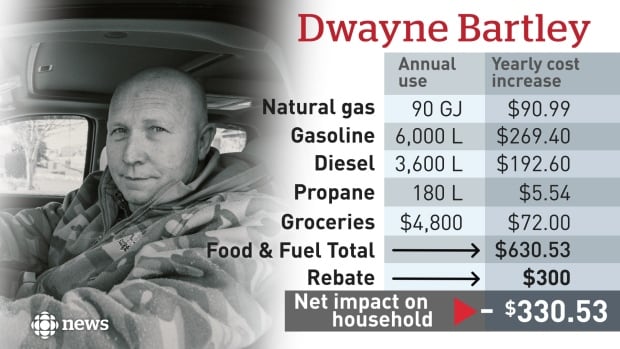 Assuming a 1.5 per cent increase in grocery prices due to the carbon tax — an estimate on the high end of what some economists have projected — the Bartleys can also expect to pay about $120 more for food. But the couple will receive $300 in carbon tax rebates from the province, which means their net cost will work out to about $330 per year, or less than $30 a month. That’s a lot less than Bartley thought he’d have to pay — and an amount he said won’t actually force him to leave. “That wouldn’t change my lifestyle at all,” he said. “That isn’t what I understood — and I’ve listened to everything that’s on the news.”

That confusion is a common theme across Alberta as residents brace for the impact of the new tax. The government has said six in 10 Albertans will get rebates to cover the average fuel costs of the carbon tax. But it’s a message many haven’t received. In her basement suite in Calgary, Angela Nurse admits she hasn’t spent a lot of time thinking about the new carbon tax and she isn’t clear on how it will impact her finances. Turns out it won’t have much of an impact at all. Nurse is frugal with her spending on food and fuel, so her related costs are likely to amount to $150 next year, offset by a $300 rebate, making the carbon tax a net gain for her household. 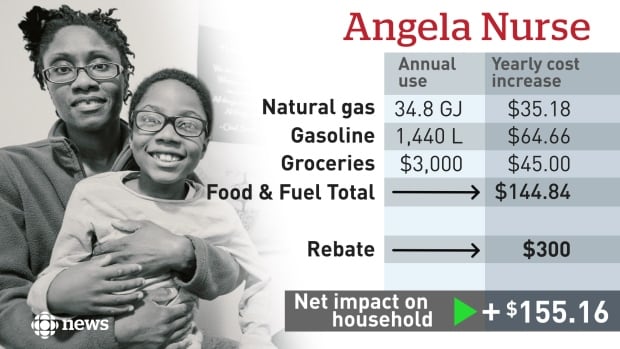 Despite the windfall, Nurse feels for her friends and neighbours who don’t qualify for the rebates, which start to phase out for individuals with net incomes above $47,500 and families above $95,000. “You get the people that are just a little bit above the threshold but they are living paycheque to paycheque, too,” Nurse said. Still, she’s happy to see the government taking action on climate change — for the sake of her son. “He’s going to be here long after I’m gone, so he’s got to have somewhere to live,” she said. “And at the rate we’re going right now, we need to rein it in or bear the consequences.”

Of course, not everyone agrees. Mike Scott runs a successful home care business in Calgary and isn’t sure Alberta’s carbon tax has much to do with reducing greenhouse gas emissions. “I am convinced it is more a general revenue for the government to be used for whatever they need to use it for in their mind and [that] may not have anything to do with the environment,” he said. Scott’s carbon tax bill will be about $215 in 2017 and he can expect another $90 or so in indirect grocery costs. He makes too much to qualify for rebates. 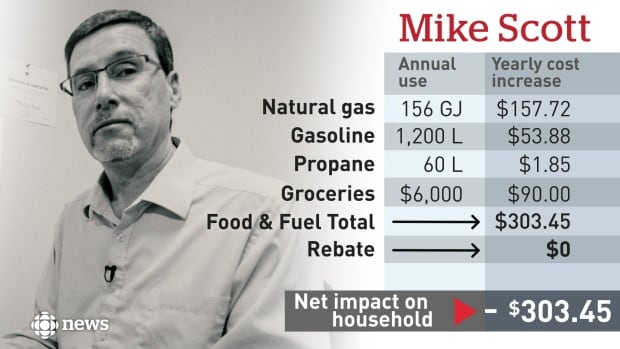 Scott said he can afford the extra cost — but he still doesn’t like the tax as a policy. The sense that Alberta’s newest tax has more to do with cash than carbon is a common one. It’s not hard to see why. The province says the new tax will bring in $9.6 billion in revenue over five years — money that will be spent on everything from green energy projects and public transit, to the billions of dollars in rebates it’s handing out to low- and middle-income Albertans. The province claims the policy will see Alberta’s emissions peak in 2020 and then decline by 50 megatonnes by 2030. Nic Rivers, an economics professor at the University of Ottawa and the Canada Research Chair in Climate and Energy Policy, said that’s plausible based on what’s happened in other jurisdictions with carbon taxes, like British Columbia. “We can look at the experience of those other taxes, and based on that kind of experience, we might expect to see a five or 10 per cent reduction in Alberta’s gasoline consumption due to this tax, as it ramps up to $30 to $50 per tonne,” he said. Rivers also expects emissions reductions as individuals and businesses work to curb their coal and natural gas use as well.

Stephen Davidson, however, worries that the financial impact on ordinary Albertans will continue to rise. His family of five will pay about $40 per month more for food and fuel next year, and they don’t qualify for rebates. 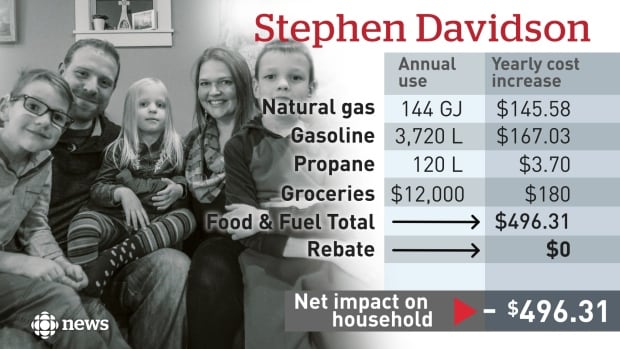 The Calgary-based IT consultant describes the initial tax as a “foot in the door” — suggesting it’s a door the government could one day swing wide open. “You want more revenue this month? You raise the price,” he said. “When these things come into place and get locked in, that lever is very tempting to adjust.” Davidson said he can manage the cost increase in 2017 but if it continues to rise year after year, some tough decisions will loom for his family and others in Alberta. “Do you stop family holidays? Do you stop gymnastics? Do you stop hockey? Like, what do you stop?”

For some Albertans, though, it’s not about the money. Like many retirees, Honora Thubron will benefit slightly from the new tax — coming out about $60 ahead next year, when her rebate is factored in. 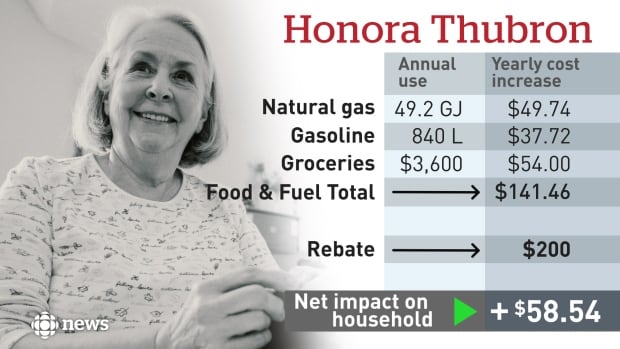 But like the rest of the women around the knitting circle at Airdrie’s Woodside Seniors Club, Thubron is no fan of the tax. “I think that many of us that are older have kind of lived with a different political outlook for a long while and maybe are somewhat skeptical,” she said. Despite the scientific evidence, Thubron isn’t sold on the connection between carbon dioxide emissions and climate change. Even if the connection is real, she said Albertans shouldn’t take the lead on addressing the problem. “We are not the only people in the world that are, you know, shooting off the carbon,” she said. “Let’s look at China. Let’s look at Saudi [Arabia]. What are they doing?”

That’s a harder sell among some younger Albertans, like Kayla Zahorouski. The single mother of three worries about climate change and supports policies aimed at curbing Alberta’s greenhouse gas emissions. “Weather is definitely changing and to me that is definitely scary,” she said. “What’s it going to be like tomorrow? Or next week or next month? It’s very unpredictable.” Zahorouski’s carbon tax costs will amount to roughly $270 next year but her income and the fact she has three children means she’ll receive $360 in rebates. 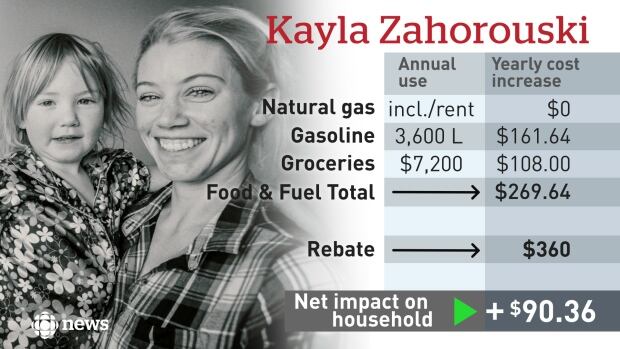 But she’d be willing to pay — up to a point — if it helped curb emissions. Even if the net cost to her was $20 or $25 a month, she said she’d support the policy. Anything past $30 would be too onerous for her household, she figures. That’s more in line with the view that the NDP government hopes will take hold, once Albertans get used to their new tax. It’s an enormous political gamble. In addition to combating climate change, Notley has argued the carbon tax is the price that had to be paid in order to get pipelines built and to finally turn Alberta’s sagging economy around. But whether her government has paid too steep a price won’t be clear until the next provincial election, set for 2019.   This article appeared on the CBC News website at http://www.cbc.ca/news/canada/calgary/alberta-carbon-tax-impact-climate-change-canada-1.3895133]]>