Growth and Water Use Benefits for Rice Under Enhanced CO2 Conditions

Paper Reviewed Kumar, U., Quick, W.P., Barrios, M., Sta Cruz, P.C. and Dingkuhn, M. 2017. Atmospheric CO2 concentration effects on rice water use and biomass production. PLoS ONE 12: e0169706. In citing the rationale for their study, Kumar et al. (2017) note that “the current and anticipated impact of climate change and the associated increase of atmospheric CO2 concentration on rice production are of great economic and social importance,” especially in the tropics where rice is a key staple crop. Thus, they set out to investigate the effects of both sub- and supra-ambient CO2 on the dry matter production and water use of this important agricultural crop species. To accomplish their objective, the five researchers grew rice in naturally sunlit and irrigated (flooded) controlled-environment chambers at the International Rice Research Institute in Los Baños, Philippines for two dry and two wet seasons (which differed in the amount of solar radiation received). CO2 treatments in the chambers included 195, 390, 780 and 1560 ppm and were maintained at these levels for 22 hours a day (the chambers were flushed of air for one hour before dawn and 1 hour after dusk to flush out trace gasses). In describing their findings, Kumar et al. report that “the current level of 390 ppmv [CO2] was distinctly sub-optimal for rice biomass production.” This fact is evident in the figure below, which illustrates the aboveground biomass at each CO2 concentration in each of the four growing seasons. As noted by the authors, the mean aboveground dry weight across all seasons was 1744 g m-2 at the current or ambient CO2 level (390 ppm), which value “decreased by 43% at 195 ppmv (0.5 x ambient), increased by 29% at 780 ppmv (2 x ambient) and increased by 42% at 1560 ppmv (4 x ambient).” With respect to water use, Kumar et al. report that whole-season crop water use under sub-ambient and current CO2 conditions was 564 and 719 mm, rising to 928 and 803 mm at 780 and 1560 ppmv CO2, respectively. And although more water was used at the higher CO2 concentrations, the amount of biomass produced per mm of water also increased (1.76, 2.43, 2.43 and 3.08 g m-2 mm-1 at 195, 390, 780 and 1560 ppm CO2, respectively). Thus, in the future, not only will the biomass of this rice cultivar increase as the air’s CO2 concentration rises, it will produce more biomass per unit of water applied, which enhanced growth and water savings are a win-win for the agriculture sector. 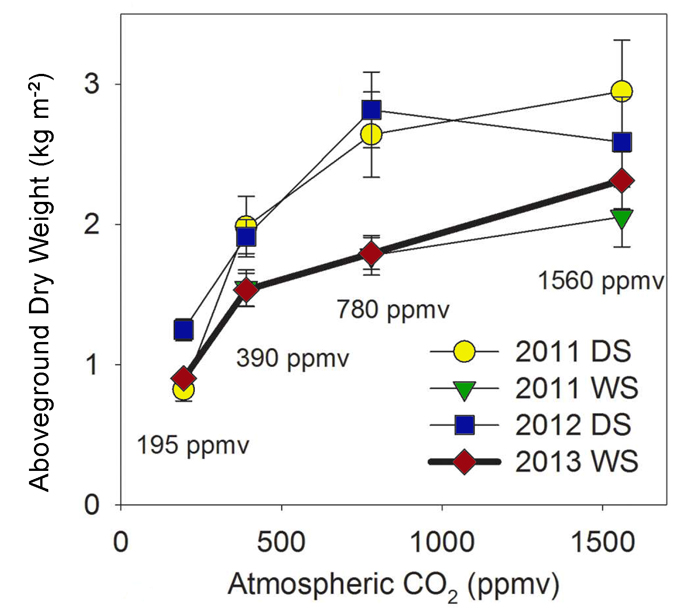