Paper Reviewed Reef, R., Spencer, T., Möller, I., Lovelock, C.E., Christie, E.K., McIvor, A.L., Evans, B.R. and Tempest, J.A. 2017. The effects of elevated CO2 and eutrophication on surface elevation gain in a European salt marsh. Global Change Biology 23: 881-890. In providing the background for their study, Reef et al. (2017) write that salt marshes are “the primary vegetated intertidal habitat in many temperate and subtropical regions and are widely distributed along the European coastline,” further noting that these important ecosystems “can play a vital role in mitigating the effects of sea level rise and in coastal risk reduction through dissipating wave energy, promoting nearshore sediment retention and/or reducing surface erosion and sediment transport.” And in contrast to engineered structures designed to combat the dangers and damages associated with rising seas, salt marshes — as natural structures — “have the potential, through surface vertical accretion, to track sea level rise and thus provide continued natural coastal protection over time.” However, there are concerns that, in the future, sea levels will rise too fast for these critical ecosystems to keep pace; the melting of polar ice from CO2-induced global warming is predicted to raise sea levels to such a degree that it will overwhelm the natural ability of salt marsh plants to keep up with the forecasted rising of the world’s oceans. But is this really the case? According to Reef et al., aside from its potential to indirectly raise sea level, rising atmospheric CO2 concentrations can directly alter biological processes that contribute to the vertical accretion of salt marshes, thus possibly counterbalancing future sea level rise; and they cite evidence in this regard obtained from CO2-enrichment experiments conducted on North American salt marshes, including the works of Langley et al. (2009, 2013), McKee et al. (2012) and Ratliff et al. (2015). Yet, they add, little is known about the potential response of European salt marshes to rising levels of CO2, which responses could vary considerably given “fundamental differences between European and North American salt marshes in species composition and diversity (e.g. the dominance of C4 photosynthesis species in North America compared to C3 species in the more floristically diverse European salt marshes), minerogenic sediment supply and the salt marsh position within the tidal frame.” Thus, it was the objective of this team of eight researchers to investigate the impact of atmospheric CO2 concentration on the surface elevation of a United Kingdom salt marsh. Treatments included two CO2 levels (400 or 800 ppm) during daylight hours and two levels of nutrient supply, low (1.5 mg l-1 N, 0.02 mg l-1 P) or high (5 mg l-1 N, 0.07 mg l-1 P), over a period of 5 months. In describing their findings, and as illustrated in the figure below, Reef et al. report there was essentially no change in elevation under the ambient CO2 and low nutrient treatment at the end of the experimental period. But under ambient CO2 and high nutrient conditions, they observed a 2.2 mm loss of salt marsh elevation, which loss they attributed to sediment shrinkage, which they say “is commonly observed in European marshes” during the summer months and which “is a reversible pattern suggested to be caused by physical desiccation, shrinkage and enhanced vegetation transpiration rates.” With respect to the elevated CO2 treatments, salt marsh elevation change was positive at both nutrient levels, increasing by approximately 1.5 and 2.5 mm under low and high nutrient conditions, respectively. Thus, the positive impacts of elevated CO2 (primarily growth and water use efficiency enhancements) were strong enough at 800 ppm to completely overpower the negative influence of sediment shrinkage observed under ambient CO2 conditions and produce the observed elevation gains. And that finding led Reef et al. to conclude that “the role of belowground processes in European salt marshes, while not currently key to surface elevation gain, is likely to become more significant as atmospheric CO2 concentrations rise,” adding that “under elevated CO2 conditions, the capacity for maintenance of elevation in European marshes through biological processes becomes considerable, potentially enhancing resilience in vulnerable systems such as those with low mineral sediment supply.” Consequently, in looking to the future, Reef et al. state that “higher rates of biologically controlled surface elevation gain can afford resilience to salt marshes where mineral sediment supply is not sufficient for surface accretion to keep up with rising sea levels,” adding that “under elevated CO2 conditions, such as those predicted by the IPCC (Myhre et al., 2013), biologically controlled surface elevation gain will be significantly enhanced and could alleviate some of the pressures exerted upon salt marsh ecosystems by an increase in sea level.” And that is news worth reporting! 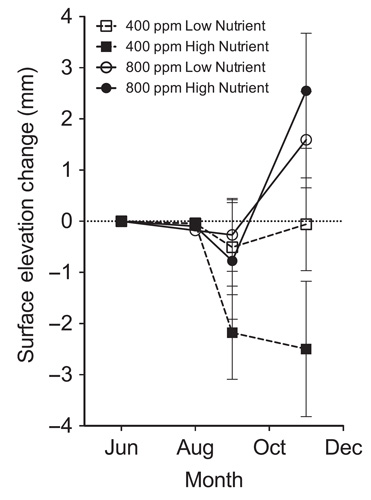