[Context: Drs. Patrick Michaels and Caleb Rossiter were invited by the Georgetown University College Republicans to participate in its “Climate Forum: A Rebuttal” event on Thursday, September 19.  Michaels, a climatologist, showed how UN climate models have over-predicted global warming threefold for the past 40 years. He said this was because the models assume more warming from industrial carbon dioxide than it actually creates. Rossiter, a statistician, explained the link between access to energy and life expectancy in Africa.  He also presented UN data showing that, despite talk of a “climate crisis,” rates of hurricanes, droughts, and sea-level rise had not changed during the era of industrial carbon dioxide. At the end of the talk, Georgetown University security police felt it necessary to escort Dr. Michaels and Dr. Rossiter to their cars.]

by Riley Rogerson Dozens of students chanted, raised posters and interrupted speakers in organized protest of the Georgetown University College Republicans event Thursday night, leading the Georgetown University Police Department to stop and restart the event. GUCR invited five climate policymakers and climate scientists, criticized by some as climate change skeptics and deniers, to deliver a conservative perspective on climate change at an event in the Reiss Science Building. The event, titled “Climate Forum: A Rebuttal,” was in response to the two-day MSNBC Climate Forum 2020, at which 11 presidential candidates are addressing environmental policy in Gaston Hall on Sept. 19 and 20, according to the GUCR Facebook page. After GUCR leadership introduced the first speaker, Marc Morano, a protestor entered the room, loudly providing further background attempting to discredit his career. Simultaneously, audience members started laughing, coughing and shouting while some cellphone alarms began intentionally sounding, causing a disruption. Another protestor, Eric Perez (COL ’23) entered wearing a clown costume and honking a horn as Morano began to present his address, “‘Climate Emergency’ Cancelled! Politicians Cannot Legislate Weather, Storms, and the Climate.” Morano is the communications director of the Committee for a Constructive Tomorrow, which advocates for free market strategies to address environmental concerns. “I’m so sorry I’m late. Is this the clown convention?” Perez loudly asked while entering the room. 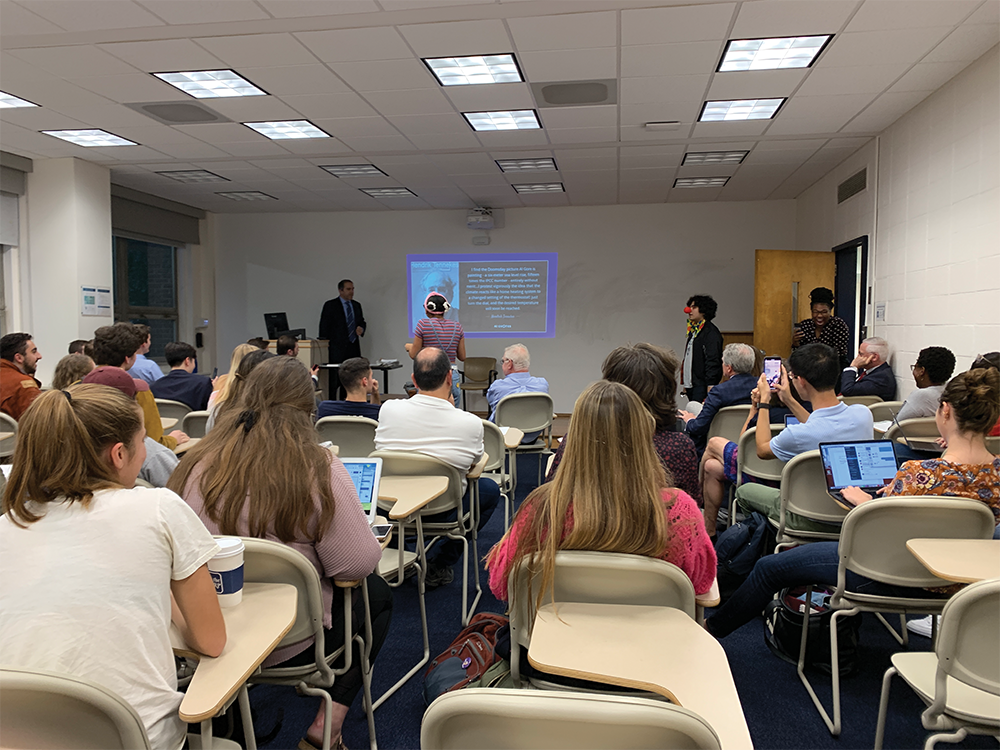 RILEY ROGERSON/ FOR THE HOYA | Protestors, including one student dressed in a clown costume, disrupted the Georgetown College Republicans Climate Rebuttal Thursday. The protestors were exercising their rights to free speech by interrupting the presenters, not infringing upon the free speech of the scheduled speakers, according to Perez. “Saying what I had to say is not me oppressing their freedom of speech. It’s me exercising my own. So they might say, ‘Oh, the left never lets us speak our dialogue’ — that’s because that dialogue is fundamentally harmful,” Perez said in an interview with The Hoya. “People are actually going to die and that’s more important to me than civility and listening to the other side.” After Perez took a seat, other students stood up and started talking and clapping over Morano. Minutes later, GUPD officers arrived in the room and requested that some of the protestors exit the classroom. As protesters refused to leave, a chant broke out among the crowd, “What do we want? Climate Justice! When do we want it? Now!” GUPD eventually instructed everyone in attendance to exit the room. After about 15 minutes of break, Geoffrey Bible, the university deputy director of protocol and events, announced the GUCR program would resume and students could not reenter the room with signs. Bible also warned that any further disruptions would lead to immediate removal from the event by GUPD officers as well as a student code of conduct violation charge. Students were also subject to a bag check upon reentry. Morano then resumed his presentation. Following the disruption, the event also featured Paul Driessen, the CFACT senior policy advisor, Caleb Rossiter, the executive director of the CO2 Coalition, which seeks to educate the public about the value of carbon dioxide in the environment; and Patrick Michaels the former director of the Center for the Study of Science at the Cato Institute. Kenny Stein, the director of policy for the Institute for Energy Research, a global energy market research organization, closed the event. At least one student was later asked to leave for interrupting the speakers following the restart of the event. Though GUCR Director of Campus Affairs Dalton Nunamaker (COL ’22) disagrees with some of the speakers’ perspectives, he was disappointed the protestors initially prevented the speakers from delivering their message, he said. “Personally, I think it is really disappointing that people are so committed to free speech that they won’t let other people express views that they disagree with. I think it is pretty contradictory,” Nunamaker said in an interview with The Hoya. “I think, as a college Republican, I try to introduce a variety of opinions and allow people to decide for themselves what’s best by hearing everything.” Morano’s presentation highlighted what he sees as contradictions in media coverage on climate change that he said spoke to the invalid evidence of the phenomenon. He also rebutted the Democratic presidential candidates’ remarks at the MSNBC climate forum earlier Thursday. Until sustainable energy becomes more accessible to the public, other energy sources should not be banned, according to Morano. “The day we can go to Walmart, buy a solar panel, put it on a house and get off the grid is the day we can stop having an argument over climate policy. Until that happens, don’t ban everything that works for energy that’s not ready to take over,” Morano said. Rossiter’s presentation: “There’s No Climate Crisis, Just an Energy Crisis: How Fossil Fuels Save Lives in Africa & America” focused on environmental statistics from his career as a research professor at American University. Climate change is completely linked to cyclical changes in the Earth’s orbit around the sun rather than human intervention, according to Rossiter. “There is not enough evidence to support high confidence that humans’ carbon dioxide are the has affected tempure enough to change the overall trend,” Rossiter said. [Correcting the typographical error: “There is not enough evidence to support high confidence that humans’ carbon dioxide has affected temperature enough to change the overall trend,” Rossiter said.] While Georgetown should engage with conservative ideas about climate change, climate change denial should be shunned, according to Georgetown Students Fighting for our Futures, a group of students who helped organize the counterprotest. “Conservative perspectives on climate change are welcome on this campus, but climate change denial is not this,” the group wrote in a statement to The Hoya. “Inviting to campus speakers such as Marc Morano, who has said climate scientists should be publicly flogged, is not a right leaning perspective; it is a message of violence.” Specials to The Hoya Sophia Haber and Grace Buono contributed reporting. ]]>