Paper Reviewed Verhage, F.Y.F., Anten, N.P.R. and Sentelhas, P.C. 2017. Carbon dioxide fertilization offsets negative impacts of climate change on Arabica coffee yield in Brazil. Climatic Change 144: 671-685. A major failure of nearly all climate change impact studies of future crop yields rests in their poor construct and design, where they near-unanimously fail to incorporate the beneficial effects of atmospheric CO2 enrichment on plant growth. As a result, yield projections in such studies are almost always shown to decline as a result of anticipated future temperature- and moisture-related stresses. But how might those projections change if the beneficial impacts of CO2 fertilization were incorporated into those studies? Seeking to answer that question with respect to Arabica coffee (Coffea Arabica) in Brazil, Verhage et al. (2017) modified an existing coffee production model that incorporated climate change so that it would also include the impacts of CO2 fertilization. And what effect did this inclusion have on projections of future coffee yields? As shown in the figure below, without including the benefits of CO2 the model projected a 7.5 percent future decline in coffee yields in response to projected future climate change impacts. However, when the growth and yield-enhancing benefits of CO2 enrichment were included, Verhage et al. found that “this effect will on average offset the extra losses due to climate change,” resulting in “a small net increase of the average Brazilian Arabica coffee yield of 0.8 percent to 1.48 t ha-1 in 2040-2070.” What is more, when Verhage et al. allowed their model to include the effects of irrigation as an adaptive response to future climate change, the combined CO2/irrigation scenario enhanced future yields up to 1.81 t ha-1, which represents an increase of 23 percent above present yield values! In commenting on their findings, the authors say their results “make it clear that the CO2 fertilization effect has the potential to offset the negative impacts of climate change on crops, such as Arabica coffee.” And indeed they do. Modelers and policy makers the world over would thus be wise to start embracing the benefits of atmospheric CO2 enrichment and include them in all future studies that predict the impacts of climate change on agricultural yields, and correspondingly, food security. 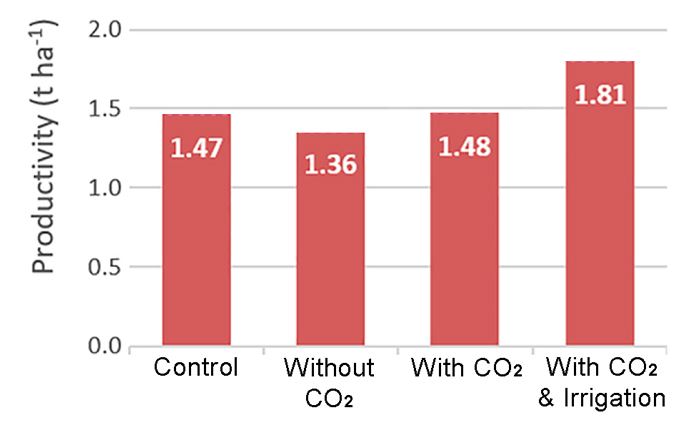 Figure 1. Current (1980-2010; Control) and model-projected changes (2040-2070) in Brazilian coffee yields, both with (With CO2) and without (Without CO2) the stimulatory effects of atmospheric carbon dioxide enrichment. Additionally, an estimate of the stimulatory effects of atmospheric CO2 in 2040-2070 are provided with the additional allowance for crop irrigation (With CO2 & Irrigation). Adapted from Verhage et al. (2017).
This article appeared on the CO2 Science website at http://www.co2science.org/articles/V20/dec/a12.php]]>