In a July 2022 episode of NBC Nightly News with Lester Holt, Kerry Sanders reported on “the concern” that “climate change means warmer waters, which brings sharks closer to shore.”

The pesky facts belie this claim:  The abstract from a 2019 peer-reviewed scientific study entitled Trends in global shark attacks stated in part that:

“For the country-level analysis, the Bayesian hierarchical model detected considerable variability in temporal patterns. For example, countries like the Bahamas and New Caledonia had high attack rates (>5 shark attacks per million people), but the high rate is strongly influenced by a low population (and a lack of tourism data). Other countries like the USA and Australia had low attack rates (<1 shark attack per million people), but reported higher numbers of attacks. The majority of countries saw no perceptible trend or change in attack rates over decades (Figs 2 and 3), while some of the higher population countries like the USA and Australia exhibited increasing attack rates over time. Annual probability plots were much more sensitive to the number of attacks per year, but also much more variable in countries with higher numbers of attacks. Generally speaking, uncertainty increased as the mean number of annual shark attacks increased, a property of any Poisson-distributed response (Fig 3).”

James D. Agresti of Just Facts News thus concluded from this study and many other sources that: “Contrary to NBC Nightly News, there is no scientific basis for the claim that climate change is causing shark attacks.”

Originally published here at Plos One on 27 February 2019. 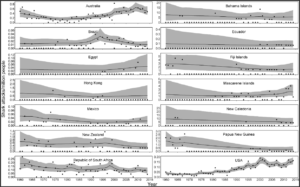 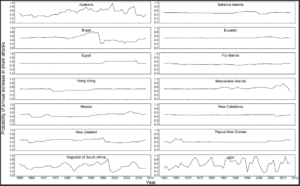