An analysis of air up to 2 million years old, trapped in Antarctic ice, shows that a major shift in the periodicity of glacial cycles was probably not caused by a long-term decline in atmospheric levels of carbon dioxide. By Eric W. Wolff

PDF version
During the past 2.6 million years, Earth’s climate has alternated between warm periods known as interglacials, when conditions were similar to those of today, and cold glacials, when ice sheets spread across North America and northern Europe. Before about 1 million years ago, the warm periods recurred every 40,000 years, but after that, the return period lengthened to an average of about 100,000 years. It has often been suggested that a decline in the atmospheric concentration of carbon dioxide was responsible for this fundamental change. Writing in Nature, Yan et al.1 report the first direct measurements of atmospheric CO2 concentrations from more than 1 million years ago. Their data show that, although CO2 levels during glacials stayed well above the lows that occurred during the deep glacials of the past 800,000 years, the maximum CO2 concentrations during interglacials did not decline. The explanation for the change must therefore lie elsewhere. 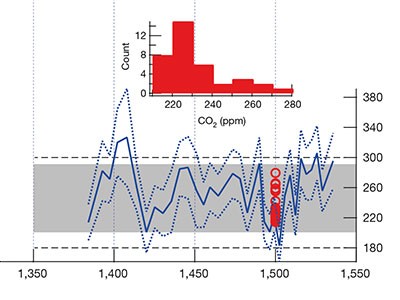 Understanding what caused the shift in periodicity, known as the mid-Pleistocene transition (MPT), is one of the great challenges of palaeoclimate science. The 40,000-year periodicity that dominated until about 1 million years ago is easily explained, because the tilt of Earth’s spin axis relative to its orbit around the Sun varies between 22.1° and 24.5° with the same period. In other words, before the MPT, low tilts led to cooler summers that promoted the growth and preservation of ice sheets. But after the MPT, glacial cycles lasted for two to three tilt cycles. Because the pattern of variation in Earth’s orbit and tilt remained unchanged, this implies that the energy needed to lose ice sheets2 had increased. One prominent explanation3 is that atmospheric levels of CO2 were declining, and eventually crossed a threshold value below which the net cooling effect of the decline allowed ice sheets to persist and grow larger. Ancient air trapped in Antarctic ice can be extracted from cores drilled from the ice sheet, allowing the CO2 concentration to be measured directly, but the ice-core record extends to only 800,000 years ago4. Estimates of CO2 concentrations from earlier periods have been made by measuring the ratio of boron isotopes in shells found in ancient marine sediments5,6. This proxy measurement depends on a chemical equilibrium controlled by ocean acidity, which, in turn, is closely related to the atmospheric CO2 concentration. But the estimates of CO2 levels inferred from such measurements are necessarily imprecise and must be verified using more-precise, direct measurements. Scientists have therefore formulated plans7 to find and retrieve deep ice cores that reach back to before the MPT (see go.nature.com/33mw4yk). One project has recently been funded by the European Union, and hopes to retrieve million-year-old ice in 2024. Yan et al. tried another approach to finding similarly old ice, but nearer the surface of Antarctica. In regions known as blue-ice areas, the combination of ice flow against a mountain barrier and surface ice loss by wind scouring and sublimation (transformation of ice directly into water vapour) leads to upwelling of old ice towards the surface. The authors therefore studied two cores, 147 and 191 metres deep, that were drilled to bedrock in the blue-ice region near the Allan Hills in Antarctica (Fig. 1). The researchers improved and applied a relatively new method8 to date this old ice. The concentration of argon-40 in Earth’s atmosphere is slowly increasing with time as it is produced from the radioactive decay of potassium-40. By measuring the ratios of argon isotopes in air extracted from cores, the age of ice can be determined. The authors also measured the ratios of deuterium (a heavy isotope of hydrogen) to hydrogen in the ice, which can be used as a proxy of temperature at the time the ice was deposited. Yan and colleagues concluded that ice in the lowest 30 m of each core is up to 2.7 million years old. However, the uncertainty of 100,000 years in this dating precludes their samples from being matched to particular parts of Earth’s tilt cycle. Moreover, the authors found abrupt age discontinuities with depth in the cores, which suggests that the layers of ice within them have been disturbed. The authors therefore treated the measured concentrations of deuterium and CO2 as snapshots of climate and atmospheric composition that corresponded to an approximate age of the ice, rather than as an ordered time series. On the basis of the deuterium values, they make a plausible case that the observed range of measured CO2 values represents most of the actual glacial–interglacial range. 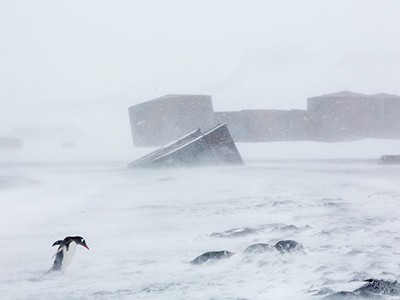 Unfortunately, in the oldest ice samples, there was evidence that the CO2 concentration had been artificially enhanced by gas produced from the breakdown of organic material at the base of the ice sheet. A few samples from about 2 million years ago were potentially not affected by this issue, but were insufficient in number to allow any conclusions to be drawn about the range of CO2 levels at that time. However, Yan et al. obtained samples from about 1 million and 1.5 million years ago that they consider to be undisturbed by the artificial addition of CO2. In both periods, the maximum CO2 concentrations are similar to those of interglacials from the past 500,000 years, peaking at 279 parts per million (p.p.m.). But the minimum value of 214 p.p.m. is much higher than the lows of around 180 p.p.m. that occurred during recent glacial maxima (the periods that corresponded to the maximum extent of ice). The authors conclude that the relationship between CO2 levels and Antarctic temperature was similar before and after the MPT. The fact that the pre-MPT ice does not contain very low ratios of deuterium to hydrogen that would be characteristic of extremely cold Antarctic temperatures, nor low CO2 levels characteristic of recent glacial maxima, is probably just a consequence of the shorter period of the glacial cycles. Such low values are generally not found in the first 40,000 years of post-MPT glacial cycles either. Although Yan and colleagues’ data points cannot be placed within a tilt cycle, it seems likely that the CO2 concentrations are not very different at the crucial points in cycles when the ice sheet is either lost (before the MPT) or continues growing (after the MPT). This forces us to look elsewhere for the cause of the longer cycles, perhaps refocusing efforts on understanding whether changes to the nature of the ice-sheet bed caused by glacial erosion9 altered the characteristics of the ice sheets and their vulnerability to melting. Yan and colleagues’ data add much-needed precision to the previously reported estimates of CO2 levels made using data from marine sediments5,6. However, their tantalizing snapshots of the pre-MPT world emphasize the need for a complete, undisturbed time series of greenhouse-gas concentrations that can be put into context with the climate cycles at that time. Let us hope that the planned new ice cores will provide that.
Nature 574, 636-637 (2019)
This article appeared on the Nature website at https://www.nature.com/articles/d41586-019-03199-8]]>