Acceleration of Tree Growth in Urban Areas in Recent Decades

Paper Reviewed Pretzsch, H., Biber, P., Uhl, E., Dahlhausen, J., Schütze, G., Perkins, D., Rötzer, T., Caldentey, J., Koike, T., van Con, T., Chavanne, A., du Toit, B., Foster, K. and Lefer, B. 2017. Climate change accelerates growth of urban trees in metropolises worldwide. Scientific Reports 7: 15403, DOI:10.1038/s41598-017-14831-w. Large cities are often considered analogs of the future; they tend to represent areas of both elevated temperature and atmospheric CO2 concentrations (see Urban Heat Island and Urban CO2 Dome in our Subject Index). As such, they provide fertile ground for investigating various projected impacts of CO2-indcuded global warming. Pretzsch et al. (2017), for example, recently analyzed the growth of trees in urban environments. Specifically, they sampled nearly 1400 mature trees across an urban to rural gradient at ten metropolitan locations situated in boreal, temperate, Mediterranean and subtropical climates. Their aim was to test if there were any differences in growth between trees growing in the urban and rural environments over the past several decades. Among the findings presented in their paper, Pretzsch et al. report that “without differentiating between urban and rural trees and between [climate] regions …on average, tree growth since 1960 has occurred more rapidly than before” (see Figure 1a, below). They also report that examination of the data “without any period and region distinction showed that, on average, urban trees can be expected to reach a greater size than rural trees of the same age,” or stated another way, “urban trees tend to grow more quickly than their counterparts in the rural surroundings” (see Figure 1b). With respect to the cause of the reported growth enhancements, Pretzsch et al. say that that determination was beyond the scope of their study, albeit they identified some probable reasons from the existing literature, including rising atmospheric CO2 concentrations, a warming climate, N-deposition, and longer growing seasons. Nevertheless, despite not knowing the cause(s), one thing is certain, the force (or combination of forces) driving tree growth-enhancements in urban areas has more than compensated for the adverse growing conditions common to such environments, such as limited rooting space and/or higher pollution levels (ozone or particulate matter). Thus, it would seem that if cities are truly analogs for the future temperature and CO2 concentration of the planet, earth’s trees will greatly benefit from their respective increases in terms of growth. And there is much more supporting documentation of this likelihood found throughout our website. See, for example, the many items posted under the heading (and subheadings) of Trees on this page. 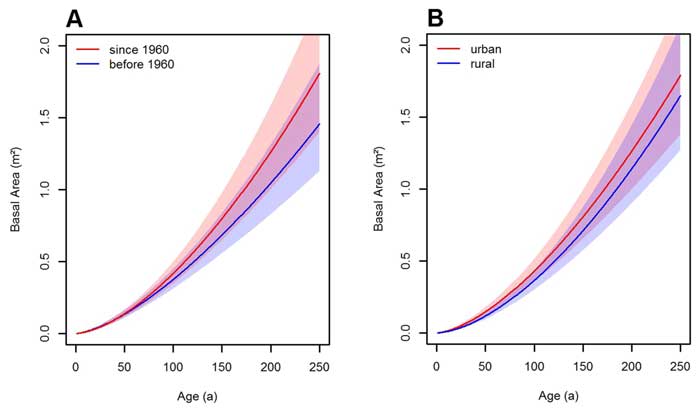 Figure 1. Effects of climate change and urbanization on tree size growth. (Panel A) Expected basal area growth of urban and rural trees together, before and since 1960, (Panel B) Expected basal area growth of urban compared to rural trees. Shaded bands visualize the prediction standard error of the curves. Despite the broad overlap of these bands, the curves in both diagrams differ in both parameters with a significance level of p < 0.001. Source: Pretzsch et al. (2017).
This article appeared on the CO2 Science website at http://www.co2science.org/articles/V21/mar/a1.php]]>