Paper Reviewed May 17, 2018 Yu, J., Zhou, G. and Liu, Q. 2018. Tree-ring based summer temperature regime reconstruction in XiaoXing Anling Mountains, northeastern China since 1772 CE. Palaeogeography, Palaeoclimatology, Palaeoecology 495: 13-23. According to Yu et al. (2018), “to improve our understanding of historical climatic regimes of northeastern China, it is important to obtain a longer record of past climatic variations,” which records can “enable recent observed climate changes to be viewed from a long-term context.” And, thus, they set out to produce a long-term temperature reconstruction for northeastern China. In doing so, the three Chinese researchers cored Korean pine (Pinus koraiensis) trees located at the Dongzhelinghe Forest Farm (~46.69°N, 129.04°E) of the Landxiang National Nature Reserve in July of 2015 from which they developed a new tree-ring width chronology that was found to correlate well with June mean temperature. Following a series of statistical procedures, the authors developed the resultant June mean temperature proxy that is illustrated in the figure below. Examination of the temperature record reveals multiple interannual- and decadal-scale fluctuations. After a 10-year smoothing of the record (the red line), Yu et al. report that relatively cold periods, defined as eight or more years continuously below average, occurred in 1772-1780, 1813-1823, 1856-1868, 1957-1985 and 1990-1998. Conversely, major warm periods (eight or more years of continuously above average temperatures) occurred in 1794-1812, 1824-1833, 1892-1904, 1910-1926, 1941-1956 and 1999-2015. The longest cold and warm periods, respectively, occurred from 1957-1985 and 1794-1812. With respect to the severity of temperatures, there were 11 extremely warm (4.5% of the total) and 19 extremely cold (7.8% of the total) years in which June temperatures were more than two standard deviations above/below the mean. Spectral analysis and wavelet analysis provided some insight as to the cause(s) of the temperature warm/cold excursions. According to Yu et al., shorter cycles embedded in the record (from 2-7.2 years) were correlated with ENSO, whereas a 10.5-11.5 year cycle correlated well with sunspot activity. A larger 70.5 years cycle was likely related to the Pacific Decadal Oscillation. In concluding this review, we note and state the obvious about this temperature reconstruction, placing recent temperatures in their long-term context: (1) there is no long-term trend in the data and (2) there is nothing unusual, unnatural or unprecedented about recent temperatures in the record. What is more, (3) natural climate oscillations (e.g., ENSO, solar activity, internal variability) seem fully capable of explaining the observed temperature trends. Consequently, the ever-powerful warming effect of rising atmospheric CO2 that climate alarmists are so certain exists (particularly over the past few decades) appears to be absent from this 244-year record. 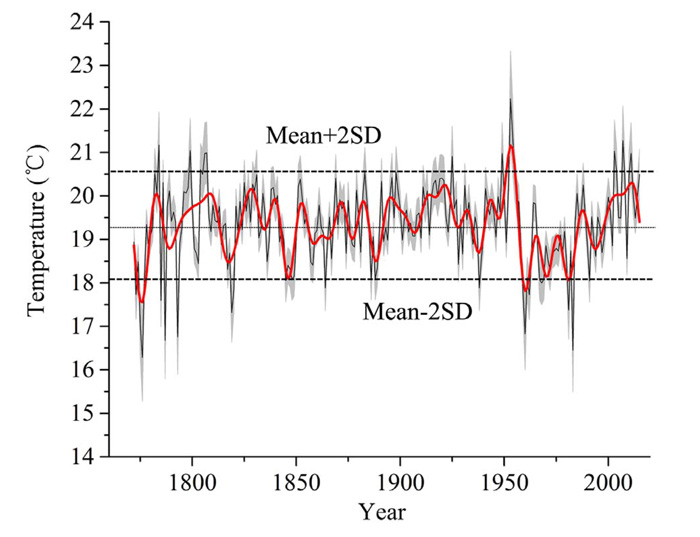