Paper Reviewed Achebak, H., Devolder, D. and Ballester, J. 2018. Heat-related mortality trends under recent climate warming in Spain: A 36-year observational study. PLoS Medicine 15: e1002617. In the words of Achebak et al. (2018), “in ageing societies such as Europe, the rising elderly population is expected to increase vulnerability to high ambient temperatures, given that the elderly have diminished physiological capacity for the regulation of body core temperature under heat stress conditions.” Consequently, heat-related mortality is predicted to increase in response to CO2-induced global warming. But is this outcome occurring as projected? This question was the subject of investigation by Achebak et al., who examined the temporal change in the heat-related mortality response for 47 cities in Spain between 1980 and 2015. Over this 36-year period, mean summer (June-September) temperatures increased by an average rate of 0.32°C per decade (1.15 °C over the whole interval), which rise, according to the authors, should have increased the number of heat-related deaths. To test their hypothesis, the three Spanish researchers applied standard quasi-Poisson regression models to cardiorespiratory mortality data at each of the 47 locations, while controlling for seasonality and long-term trends, to estimate the temporal variation in heat-related mortality with time-varying distributed lag nonlinear models. Results of the analysis revealed that there was a temporal decline in the relative risk of mortality across the whole range of summer temperatures (see Figure 1), which reductions “explained the observed downward trends in heat-attributable deaths” (also see Figure 1). Consequently, Achebak et al. conclude that the results of their study “strongly support the hypothesis that the observed warming trend in summer temperatures in Spain has not been paralleled by a general increase in the mortality fraction attributable to heat, as a result of substantial decline in population vulnerability to warm temperature.” And they additionally note that the temporal amelioration of heat-related mortality risk they observed “is consistent with [that] reported by previous studies in some other countries,” citing the works of Barnett (2007), Davis et al. (2003), Bobb et al. (2014) and Gasparrini et al. (2015). The results of this study thus stand in direct opposition to climate alarmist predictions that rising temperatures will result in greater heat-related mortality. Instead, fewer deaths have resulted in response to an increase in summer temperatures across Spain. And that is good news worth reporting! 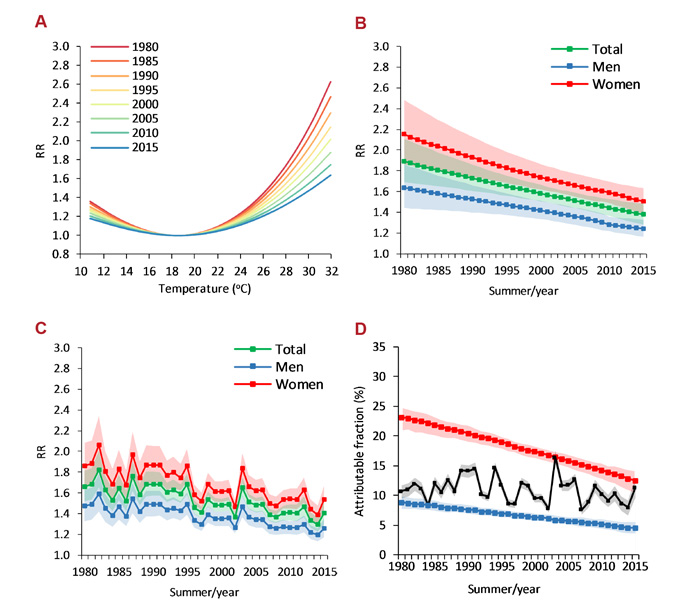