A Positive Response of Montane Birds to Recent Warming

Paper Reviewed DeLuca, W.V. and King, D.I. 2017. Montane bird shift downslope despite recent warming in the northern Appalachian Mountains. Journal of Ornithology 158: 493-505. Climate alarmists generally characterize global warming as detrimental for most of the planet’s animals, including birds, even suggesting that rising temperatures could drive many of them to extinction. However, when contemplating the special abilities of the winged creatures (like their ability to fly), one would think it would not be much of a problem for them to compensate for whatever degree of stress a temperature increase might impose upon them by merely moving to more hospitable living quarters, or to actually take advantage of whatever new opportunities global warming might present for them (such as expanding their ranges into newly-warmed habitats). As shown in several previous studies we have reviewed on this topic (see here), it appears that birds do indeed act logically and take the latter course of action to avoid extinction. We also learn that our “fine feathered friends” are able to tolerate much greater heat stress than what climate alarmists seem willing to acknowledge. The latest study to confirm as much comes from DeLuca and King (2017), who analyzed bird habitats along an elevational gradient (between 700 and 1500 m) in the White Mountains of New Hampshire, USA, over the period 1993 to 2009, which location has experienced a warming trend of 0.07°C per decade since the 1930s. Using bird survey data over this 17-year time period, the two researchers identified 75 species of which 28 had sufficient sample sizes to perform statistical analyses on their habitat ranges. Of these 28 bird species, 16 were designated as low-elevation species (<750 m) and 12 as high-elevation species (>750 m). Results of their analysis indicate that ten of the 16 low-elevation species showed evidence of a shift in their upper elevational boundary over the period of study, nine of which expanded upslope (indicative of a range expansion, as their lower elevational boundary did not shift) and one downslope (a range contraction). With respect to the 11 high-elevation species, in viewing the figure below it is seen that seven out of the 11 species expanded their upper boundary upslope (indicative of a range expansion) and nine of the 11 expanded their lower boundary downslope. Taken together, these observations indicate that eight of the 11 high-elevations species underwent a range expansion, one experienced no change and two a range contraction. Thus, it would appear that the birds of the northern Appalachian Mountains have collectively responded in a positive manner to recent warming, expanding and overlapping their ranges so as to enrich their biodiversity and reduce the likelihood of their extinction. Commenting on their findings, DeLuca and King state that “although prevailing theory states that montane species will respond to the changing climate by shifting their distributions up in elevation” and experience range contractions and possible extinctions, “we provided evidence that, even in the face of regional warming trends at mid-elevations, montane birds shifted downslope while low-elevation birds shifted upslope.” Such “opposing elevational shifts of two distinct and adjacent bird communities,” according to the authors, “highlights the need for caution when applying conventional [alarmist] expectations to species’ responses to climate change.” Indeed! 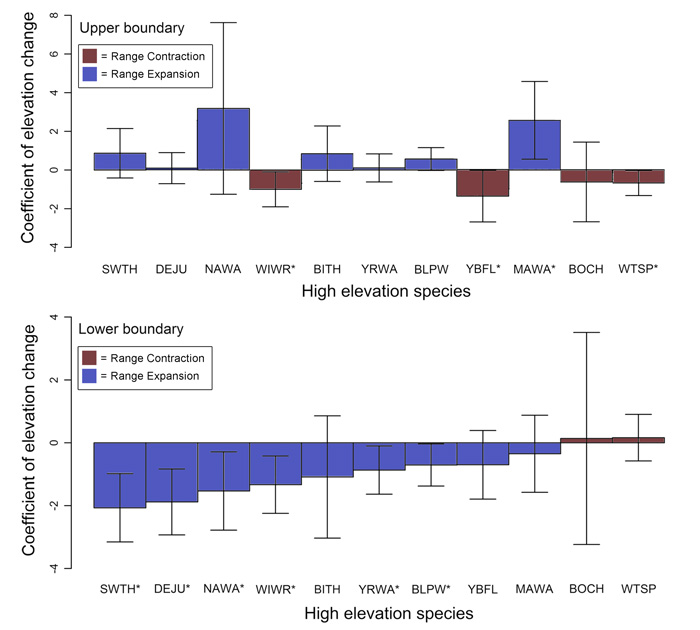