Paper Reviewed Sun, X., Ren, G., Ren, Y., Fang, Y., Liu, Y., Xue, X. and Zhang, P. 2018. A remarkable climate warming hiatus over northeast China since 1998. Theoretical and Applied Climatology 133: 579-594. A prominent feature of all climate model projections is their prediction that temperatures should be rising in response to ever-increasing concentrations of greenhouse gases. However, for the past two decades global surface air temperatures have not warmed to the degree predicted by the models, which lack of warming has been a conundrum to the climate alarmist movement. The latest group of researchers to document this so-called global warming hiatus (GWH) period is that of Sun et al. (2018). Focusing their research on the region of northeast China, the seven Chinese scientists analyzed the temperature records of 118 stations that were obtained from the China Homogenized Historical Temperature Dataset. More specifically, they calculated and examined trends in both monthly and annual mean, maximum and minimum air temperatures at each of the 118 locations over the period 1951 to 2014. Results are illustrated in the figure below. In describing their findings, Sun et al. say that their analysis “confirms a remarkable warming slowdown in northeast China during the GWH period, [which] hiatus is more obvious than those reported for mainland China and the globe.” Indeed, the authors report that over the period 1998-2014, the annual mean temperature “consistently exhibits a cooling phenomenon in northeast China,” with trends of mean, maximum and minimum temperature of -0.28, -0.36 and -0.14 °C per decade, respectively (see the blue shaded bars in the right panel of Figure 1). In addition, we note that a visual inspection of the annual maximum, minimum and mean temperature series, shown below, reveals that temperatures have been relatively flat (no trend) since the late 1980s, suggesting an even longer GWH period and discrepancy between model projections and observations over the past three decades. Further examination of the temperature records by the authors revealed that the recent annual mean temperature decrease is dominated by a “remarkable cooling of winter and spring.” The significance of this finding was not lost on the authors, who note that “the cooling climate in northeast China during the past 17 years may pose a huge challenge to the agricultural activity and natural system.” This is because northeast China is “one of the most productive regions of grains in the world,” where the grain yield amounts to approximately 20% of China’s total. If the cooling trends continue, according to Sun et al., “the instability of agricultural production will increase in the future in this important grain production region of mainland China,” possibly leading to more frequent and more severe crop yield reductions and subsequent food shortages. One can only hope the GWH will soon come to an end so that these real problems might not ensue. 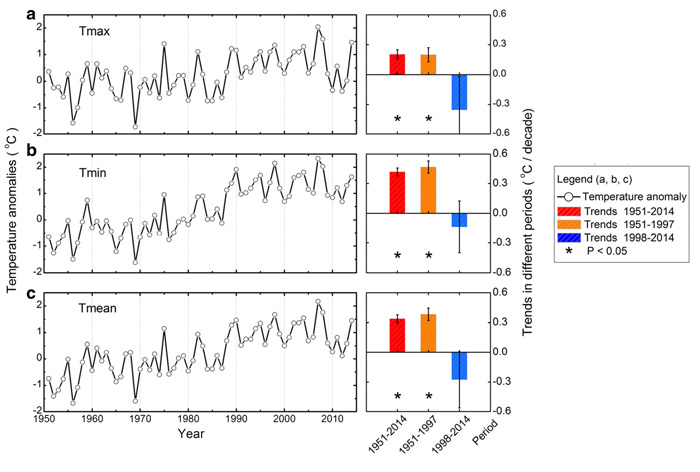