A CO2-induced Enhancement of Wheat Grain Yields on Acidic Soils

Paper Reviewed Dong, J., Grylls, S., Hunt, J., Armstrong, R., Delhaize, E. and Tang, C. 2019. Elevated CO2 (free-air CO2 enrichment) increases grain yield of aluminum-resistant but not aluminum-sensitive wheat (Triticum aestivum) grown in an acid soil. Annals of Botany 123: 461-468. Writing as background for their study, Dong et al. (2019) note that acidic soils comprise approximately half of the area of the world’s arable lands, which less-than-ideal conditions often reduces the yields of most crops. To combat these unfavorable growing conditions, scientists and farmers are searching and developing crops with mechanisms to help them counter the negative effects of soil acidity, which principally results from aluminum soil toxicity or phosphorus deficiency (or a combination of both these factors). And in this regard, aluminum-resistant genes have been identified in certain crops (e.g., wheat lines) that show promise in alleviating such toxicity. However, there remains a dearth of information on this topic, including how rising atmospheric CO2 concentrations may impact crop growth and yields under such acidic conditions. Thus, it was the focus of the six-member research team of Dong et al. to conduct just such an analysis. To accomplish this objective, the scientists examined the effects of elevated CO2 on the grain yield of six wheat (Triticum aestivum) lines, four of which carried aluminum toxicity-resistant genes (ET8, Egret TaMATE1B, EGA-Burke and EGA-Burke TaMATE1B) and two of which carried aluminum toxicity-sensitive genes (ES8 and Egret). All work was performed at the SoilFACE facility at Horsham, Victoria, Australia, where the wheat lines were grown in columns of acidic soils (made acidic by aluminum) in a free-air CO2 enrichment (FACE) environment under ambient (400 ppm) or elevated (550 ppm) CO2 concentrations for a full growing season. The authors’ key findings are presented in the figure below. Focusing on the most important response, Dong et al. write that “elevated CO2 increased grain yield of all wheat lines by an average of 20% (P = 0.027),” although the two aluminum toxicity-sensitive lines had non-significant differences (see Figure 1). Dong et al. also report the favorable finding that elevated CO2 “did not affect grain quality in terms of protein and mineral concentrations.” In light of the two main findings above, the authors conclude that, as the air’s CO2 concentration rises, it would be wise for wheat breeders to maintain aluminum-resistant genes in their germplasm so that farmers can maximize wheat grain yields on acidic soils in the future. 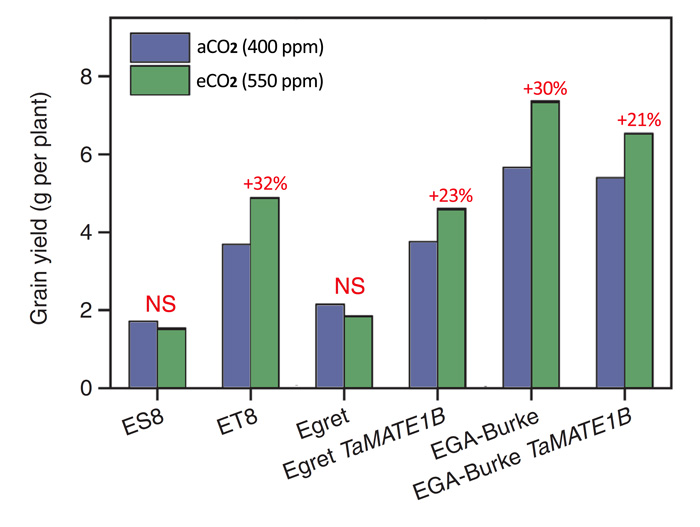 Figure 1. Grain yield of six wheat lines grown in an acid soil under two CO2 concentrations (aCO2, 400 ppm; eCO2, 550 ppm). NS denotes no significant difference (t-test; P > 0.1) between the paired means of a given wheat line. All other paired means are significantly different with a P value less than 0.05, except Egret TaMATE1B, which has a P level of 0.09. Percentage differences in the means are presented in red text for the four lines with significantly different grain yields. Source: Dong et al. (2019).
This article appeared on the CO2 Science website at http://www.co2science.org/articles/V22/may/a1.php]]>