Paper Reviewed Park, T., Ganguly, S., Tommervik, H., Euskirchen, E.S., Hogda, K.-A., Karlsen, S.R., Brovkin, V., Nemani, R.R. and Myneni, R.B. 2016. Changes in growing season duration and productivity of northern vegetation inferred from long-term remote sensing data. Environmental Research Letters 11: 084001. According to Park et al. (2016), the monitoring and understanding of past climate-induced changes in arctic and boreal vegetation is crucial to correctly predicting their future. So taking their own advice, they used a 33-year (1982-2014) record of satellite observations of important growing season metrics — start of season (SOS), end of season (EOS) and length of season (LOS) — to calculate the historical progression of each growing season’s gross primary production. This work revealed, according to the nine researchers, that over the course of their study the LOS grew by 2.60 days per decade, due to an earlier SOS onset of 1.61 days per decade and a delayed EOS of 0.67 days per decade, all of which occurred at the circumpolar scale over the past three decades. And this increase in growing season length — together with the concomitant increasing photosynthetic activity that the researchers obtained from normalized difference vegetation index (NDVI) satellite-derived measurements of the amount of photosynthetically active radiation absorbed by vegetation — resulted in “a predominant greening trend over 42.0% of the northern vegetated area,” which was “translated to a 20.9% gain in gross primary productivity during the last three decades” (see figure below). In summing things up, Park et al. state that “this greening translates to a 20.9% gain in productivity since 1982,” while in contrast they say that “only 2.5% of northern vegetation shows browning, or a 1.2% loss of productivity,” both of which trends in productivity “were continuous through the period of record.” Thus, we have yet another study of observations confirming the ongoing Greening of the Earth (see the many studies archived in our Subject Index under this topic here). 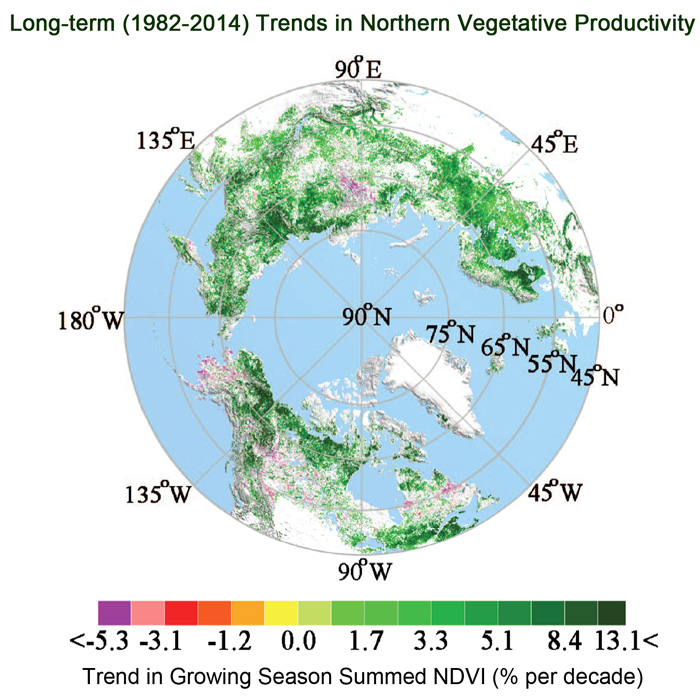