77 peer-reviewed scientific papers authored by several hundred scientists linking solar activity to climate change.  There were 43 as of the end of June, as seen here.   In other words, there have been 34 more papers linking solar forcing to climate change made available online just since July. This publication rate for 2016 is slightly ahead of the pace of published papers linking solar forcing to climate change for  2015 (95 Solar-Climate papers ) and 2014 (93 Solar-Climate papers).   At this rate, it is likely that a list of 300+ scientific papers linking solar forcing to climate change will have been made available between 2014 and 2016. In addition, there have already been 41 papers published in science journals this year linking natural oceanic oscillations (i.e., ENSO, NAO, AMO, PDO) to climate changes.  There were 27 such papers as of the end of June. The solar-ocean oscillation climate connection has gained widespread acceptance in the scientific community.  For example, see “35 New Scientific Publications Confirm Ocean Cycles, Sun Are the Main Climate Drivers” The latest papers linking solar activity as well as ocean oscillations to climate changes are listed below.   Not only do these papers describe solar activity and ocean oscillations as the dominant mechanisms of climate change, they provide evidence that the modern, post-1950 period does not contain the highest temperatures of the last few hundred years.  In fact, these papers each document that temperatures during some periods of the 1700s and/or 1800s were just as warm or warmer than present temperatures. That periods with much lower CO2 concentrations (of about 280 parts per million, or 0.028% of atmospheric gases) could have warmer-than-now temperatures (with present CO2 concentrations reaching 400 parts per million) defies claims that variations in CO2 primarily (or even exclusively) determine the temperature of the planet’s water and air, and that natural variations in solar activity, ocean heat distribution/cycling, clouds, volcanic activity…play little to no role in long-term climate change. Perhaps this CO2-drives-climate paradigm needs to be updated to reflect the growing body of scientific evidence that the Sun and natural ocean cycling are primarily what drive temperature variations — not CO2.   1. Incarbona et al., 2016   (Sicily, Aegean Sea)

Comparison between the records and multi-decadal atmospheric circulation patterns and climatic external forcings indicates that Mediterranean circulation destabilisation occurs during positive North Atlantic Oscillation (NAO) and negative Atlantic Multidecadal Oscillation (AMO) phases, reduced solar activity and strong tropical volcanic eruptions. They may have recurrently produced favourable deep-water formation conditions, both increasing salinity and reducing temperature on multi-decadal time scales. [B]oth NAO and AMO are of importance for the Mediterranean climate variability. In particular, at multidedacal scales, positive NAO phases lead to decreased precipitation (i.e. higher salinity) while negative AMO leads to reduced SSTs. Both processes may have favoured deep-water formation events on relatively long time scales. Thermohaline circulation destabilisations in the Mediterranean circulation also seem to be linked to reduced solar activity (ref. 40; Fig. 4D) and to frequent volcanic eruptions (ref. 41; Fig. 4E). Solar activity modulates patterns in surface temperature and pressure that resemble NAO phases, through dynamical coupling processes between the stratosphere and the troposphere that transmit the solar signal to the Earth’s surface. The increase in sulphur aerosols from tropical volcanic emissions produces stratospheric and surface conditions that resemble the positive NAO phase and cause decrease in oceanic heat content, with long-lived temperature anomalies extending to the mid-depth and deep ocean, an increase in sea ice volume and enhancement in the overturning circulation of the North Atlantic Ocean following these eruptions. These phenomena may have shaped the North Atlantic atmospheric pattern, which in turn may have led to Aegean SSTs cooling and thus surface buoyancy loss and enhanced Eastern Mediterranean deep-water formation during EMT-like events.

To study the imprints of the solar–ENSO–geomagnetic activity on the Indian subcontinent, we have applied singular spectral analysis (SSA) and wavelet analysis to the tree-ring temperature variability record from the Western Himalayas. Other data used in the present study are the solar sunspot number (SSN), geomagnetic indices (aa index), and the Southern Oscillation Index (SOI) for the common time period of 1876–2000. Both SSA and wavelet spectral analyses reveal the presence of 5–7-year short-term ENSO variations and the 11-year solar cycle, indicating the possible combined influences of solar–geomagnetic activities and ENSO on the Indian temperature. Another prominent signal corresponding to 33-year periodicity in the tree-ring record suggests the Sun-temperature variability link probably induced by changes in the basic state of the Earth’s atmosphere. In order to complement the above findings, we performed a wavelet analysis of SSA reconstructed time series, which agrees well with our earlier results and increases the signal-to-noise ratio, thereby showing the strong influence of solar–geomagnetic activity and ENSO throughout the entire period. The solar flares are considered responsible for causing the atmospheric circulation patterns. The net effect of solar–geomagnetic processes on the temperature record might suggest counteracting influences on shorter (about 5–6-year) and longer (about 11–12-year) timescales. The present analyses suggest that the influence of solar activities on the Indian temperature variability operates in part indirectly through coupling of ENSO on multilateral timescales. The analyses, hence, provide credible evidence of teleconnections of tropical Pacific climatic variability and Indian climate ranging from inter-annual to decadal timescales and also suggest the possible role of exogenic triggering in reorganizing the global Earth–ocean–atmospheric systems. 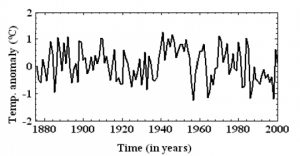 This article appeared on the No Tricks Zone website at http://notrickszone.com/2016/09/22/4-new-papers-link-solar-activity-natural-ocean-cycles-to-climate-and-find-warmer-temps-during-1700s-1800s/#sthash.noIOk83z.y6C7KqCd.dpbs]]>