“Newspapers are supposed to factually report on events. Apparently, the Columbia Missourian newspaper didn’t get the memo. On Wednesday July 13, the newspaper ran this editorial cartoon by John Darkow in its opinion section. The cartoon, featuring the Warner Brothers “Looney Tunes” character “Yosemite Sam” (in the post-woke world, sans his two six-guns one should note) in one of his trademark tantrums, makes a big fat mistaken assumption about the Yosemite fire – ‘climate change’ didn’t start it.” 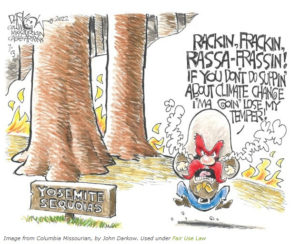